Poor sidewalk conditions, though not a cycling issue, is a major problem in Montreal that I find too frustrating not to write about.  It’s a problem that impacts all of us – though not equally.  Most of us are capable of navigating barriers, bumps and other hazards on sidewalks; it can be annoying, especially while we attempt to move through the city while focusing on the screen in our hands.  However, for our most vulnerable, (parents pushing strollers and people using walkers or wheelchairs) these hazards represent impenetrable barriers and often force dangerous crossings.

I could not find any bylaws in Montreal (searching both in french and in english) that spell out the rules governing the treatment of temporary barriers due to construction work or other activities.  The search was not exhaustive and there could be some rules out there, however, if there are any rules that protect pedestrian’s safe passage, they are rarely, if ever, enforced.  I did find one reference, in the Montreal pedestrian charter, to protecting pedestrians near barriers (protège les piétons à proximité des entraves), but I found no actions in how to achieve that goal.

The sidewalks in Montreal are rife with barricades, metal fences and missing pavement. During a short bike ride along Milton this morning, I found two such cases. Exhibit A – a metal fence completely blocking a heavily-used sidewalk on Milton in order to cordon-off an area for the creation of a mural.  I love the Festival Mural – however the organization of it should involve accommodating pedestrians where sidewalks are blocked.  In this case, a convient detour is needed which would include an accessible ramp and traffic cones to separate pedestrians from motorized vehicles.

Exhibit B – also on Milton – a sidewalk barrier due to the installation of pavement on a sidewalk segment that sees thousands of pedestrians per day.  In this case as well there was no accommodation for pedestrians with limited mobility: no ramp, no protective cones used to keep vehicles away from pedestrians using the street to bypass the barrier.

As I was about to leave the site, I saw a woman with limited mobility cross the barrier.  It was not easy for her – she paused for a while to figure out how she would navigate the obstacle.  In the end, she chose to lift the walker herself (i offered to help but she refused) down the curb. It is terribly wrong not to accommodate our most vulnerable.  Not only was it a big challenge for her to circumvent this barrier, but it also presented a health risk.  In talking to her after I took the photos (I asked her for permission to post these), I found out that she suffers from a condition that weakens her bones.  Had she fallen, she would have been much more susceptible to a bone fracture than most. It hadn’t occurred to me prior, but the same people who have limited mobility are often at greater risk of injuring themselves navigating dangerous terrain. 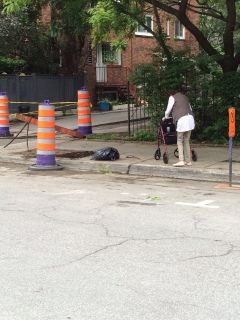 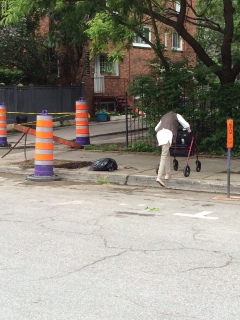 The City of Montreal can do much better to ensure the safety and convenience of pedestrians navigating our sidewalks.  It’s time to create policy that limits the duration of sidewalk barriers and requires that appropriate detours be created around the obstacle.  Furthermore, any regulations would have to be well-enforced the SPVM and other public security agencies.